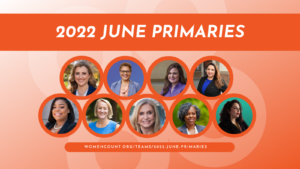 We are still waiting for primary results in key May races, most notably in TX-28, where Jessica Cisneros is within less than 200 votes of incumbent Rep. Henry Cuellar. There’s likely to be a recount, and not all mail ballots are counted yet.

And of course, we are all still processing the other news from Texas, and waiting to see if Congress will at last take any action.

While we wait, let’s get a jump on funding June primary candidates.

Elections in California and Iowa are coming up in just two weeks, on June 7, and we haven’t hit our fundraising goal. There are three races we’ll be watching that day:

The next big night will be June 28, when Illinois and New York hold their primaries. We’ll be watching:

We’ll be watching the NY governor’s race too, but incumbent Gov. Kathy Hochul does not have a competitive race. And there are also primaries in Colorado, but Brittany Pettersen (CO-7) and Yadira Caraveo (CO-8) are running unopposed.

Just two weeks left to fund June 7 races. Give $5 or more now to each candidate on our June primaries slate.

Look for an update later this week with full May primary results.