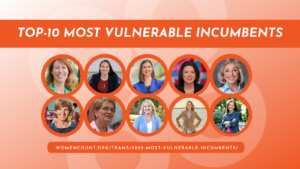 Election Day is 100 days away!

Primary season is almost over, and we’re getting a clear picture of which House races will be the closest. With 12 Democratic women already retiring, defeated in primaries, or running for other office, we are facing the very real possibility of net losses in the total number of women serving in the next Congress.

That’s why today we’re asking: Can you help us mark this pivotal moment by giving $100 to our slate of the Top-10 Most Vulnerable Incumbents?

Here’s the state of play in these 10 races:

And if you can’t give $100, any amount makes a difference.