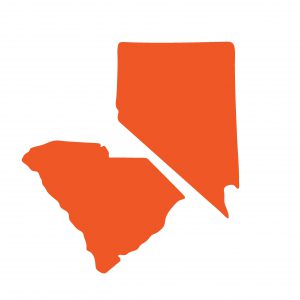 Though they’ll be critical to keeping Amy Klobuchar and Elizabeth Warren in the presidential race, Nevada and South Carolina are more important than presidential politics this year.

There are two critical down-ballot races that can help Democrats keep and increase our majority in the House: NV-3, currently held by Rep. Susie Lee, and SC-2, a Republican seat Adair Boroughs is hoping to flip.

Non-presidential primaries aren’t until June 9, but chipping in now to our Early States: Nevada and South Carolina slate will give Susie and Adair important early money, and help Amy and Elizabeth make it through the next two weeks.

Right now, it looks like Adair could have a somewhat competitive primary, though she is the front-runner. And both general election races are likely to be close.

Susie Lee swept comfortably into office by 9 points during the 2018 Blue Wave, but NV-3 is still a battleground district. Jacky Rosen won the seat by 1 point in 2016; before that it was held by a Republican. The district is still rated R+2—and it went to Trump in 2016. With Republican turnout juiced by Trump’s presence on the ballot, holding this seat won’t be easy.

In SC-2, incumbent Republican Joe Wilson faced his closest election in a decade in 2018. The district is still a long-shot but does include a large number of Obama-Trump voters Adair Boroughs could win back. It’s the kind of district Democrats need to compete in if we want to expand our Congressional map this year and in the future.

Support Adair, Susie, Amy and Elizabeth while all eyes are on Nevada and South Carolina. Chip in $5.