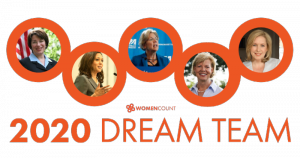 Today is President’s Day, a holiday that usually glides by without much more than a mattress or car sale to mark the occasion.

This year, though, we’re reminded that we almost had a woman president. Instead, President’s Day will continue to be a men-only affair, though there are several potential 2020 women presidential candidates.

We were sad, so we got busy and made this 2020 Dream Team slate: Five women we think have a real shot at running for president in 2020. Chip in $25 and cheer them on!

Bonus impact: four of these potential 2020 women presidential candidates—Klobuchar, Warren, Baldwin and Gillibrand—are up for re-election next year.

Chip in $25 to our Dream Team to help them get re-elected, and ensure we stay on track to make our dream of a woman president reality in 2020!