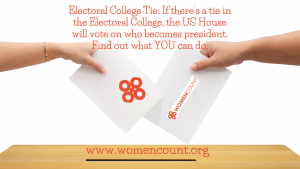 Are you ready for Devil’s Night?

You read that right: In some parts of the country, the night before Halloween is called “Devil’s Night,” “Mischief Night,” or “Gate Night.” It’s a night for adolescent pranks, vandalism and—if you’re wondering why “Gate Night”—when the gates of Hell open to let unruly souls run wild in our mortal plane.

So we thought tonight was the night to let our unruly nightmares run wild. One of our spookiest right now: What if the Electoral College is tied or chaos in the states means neither candidate gets to 270?

We’ve broken this down for you before, but in case you need a refresher: If the Electoral College is tied, the House will vote by delegation—50 votes—to pick the president. And right now, Republicans control 26 House delegations. The good news is that it’s the next Congress that will vote.

That’s the idea behind our Electoral College Tie slate: Eight candidates who can help us flip and hold at least 26 House delegations. Chip in $5 to each of them now.

Let’s make sure we can push our nightmares—and our national nightmare—back through the gates of hell on November 3.