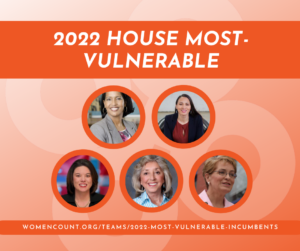 The first quarterly fundraising deadline is coming up March 31, and there are five women on the DCCC’s newly updated “Frontline” incumbents list who need our help now to post competitive numbers.

The list is discouraging news overall for women’s representation in Congress: More than half of the most-vulnerable Democrats on the list are women. By contrast, 76 percent of Republican challengers to these incumbents are men.

But there’s good news too: Women on the DCCC’s “Frontline” incumbents list are raising slightly more on average compared to their male counterparts ($2.2 million to $2.1 million) … but still have less cash on hand ($2.5 million to $3.1 million). These amounts reflect an analysis of fundraising totals for calendar year 2021 based on FEC data from OpenSecrets.

So we’ve updated our Most Vulnerable Incumbents slate with five candidates who are either 1) behind in fundraising or 2) facing Republicans who are posting the biggest hauls:

Give $5 or more to these women now and help set the tone for their races this year.

Grace Haley is the new Research Director for WomenCount and the Electing Women Alliance. Her research will focus on identifying trends among women donors, challenges that fundraising presents for underrepresented candidates, and the variables that create obstacles for women, especially women of color, to lead successful campaigns. She previously was the gender and race researcher at the Center for Responsive Politics/OpenSecrets and a freelancer with ProPublica and the Associated Press.