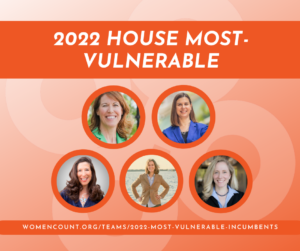 Two thirds of states have now completed their redistricting process, and we’re getting a clearer view of which Democratic incumbent women will be most vulnerable this year.

Note that these are only candidates whose states have completed redistricting. We’ll be adding to the slate as more states certify their new maps. They are:

Cindy Axne, IA-3: Both her new and old district are rated R+2. Even though she managed to squeak out a win last cycle, it will be much tougher in a mid-term, while facing a serious challenge from Republican state Sen. Zach Nunn.

Elissa Slotkin, MI-7: Her district has improved slightly, from R+6 to R+4, but she’s also likely to have a tougher time in a mid-term, and is also facing a credible challenger, Republican state Sen. Tom Barnett.

Theresa Leger Fernandez, NM-3: Her district has gone from a D+14 rating to D+5—a slim enough margin that it could spell trouble this year. So far she has no high-profile challenger, but expect that to change.

Elaine Luria, VA-2: Her district has gone from R+2 to R+6, and her most prominent current challenger is state Sen. Jen Kiggans.

Abigail Spanberger, VA-7: She is now in a better position, with her district changing from R+5 to D+2. But that margin is not large enough to keep her out of trouble, especially with two challengers: a prominent local business owner and a local political operative who worked for former Gov. Bob McDonnell.

Chip in $5 to each of them now, so we can maintain women’s numbers in Congress and keep control of the House.