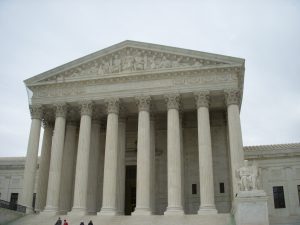 A Supreme Court dominated by right-wing justices means a constant attack on our basic rights and liberties—and I can’t think of a more urgent reason to be emailing you right before our Independence Day holiday.

Precedent won’t save us. The Court’s conservative majority showed last week in Janus v. AFSCME that it’s perfectly comfortable overturning a 40-year-old decision. And the Court’s conservatives also had no problem gutting the 53-year-old voting rights act five years ago. Roe v. Wade—which just turned 45—is in grave danger, as are gay rights, and all civil rights.

What can save us? Denying Trump a vote on whatever nominee he puts forth, and winning back the Senate, so we can vote to confirm a consensus nominee.

Let’s do it: Chip in $5 to the 5 women running to help Democrats Take Back Congress.

This election is likely to be the most consequential of our lifetime Meghan. I said that in 2016 too—but the truth is, with every electoral loss, the stakes just get higher. If we had kept the Senate in 2014, we could have confirmed an Obama-appointed justice easily in 2016. Now, four years later, we have to pull a hail Mary: win back the Senate in a razor-thin election year.