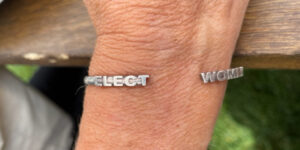 We’re less than three weeks from Election Day, and fundraising continues to run strong for Democratic candidates—most of them.

(ICYMI: The DCCC out-raised the NRCC in Q3, a spot of good news as Republican super PACs swoop in to boost floundering Republican candidates.)

But some candidates have fallen behind, due to blockbuster fundraising from their Republican opponents, or a simple lack of support from institutional sources.

Our updated 2022 Top Races slate is seven candidates who need a fundraising surge ASAP to make it through these final weeks. These are races where late funding still matters: Rush a donation of $5 or more to each candidate now.

Bonus: Everyone who supports our slate this week will be entered to win one of these stylish Elect Women bracelets from Love, Lori Michelle:

These seven races are sorely lacking in investment, even though Democrats are within a coin-flip of winning them. Our chances can solidify or evaporate by Election Day depending on whether these candidates get the funding they need.

Rush a donation of $5 to each of these women who need late money now.

Reminder: Supporting the slate will enter you to win an Elect Women bracelet.