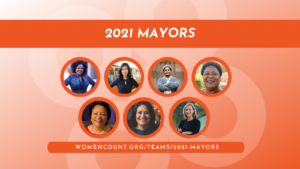 Your Election Day 2021 countdown for this week: Seven mayoral candidates who need your support in the next seven weeks.

Here are the candidates—and a little bit about why your donation can make the biggest difference in these particular races:

Felicia Moore, Atlanta, open seat: This race boasts a mind-boggling 14 candidates, but the competition is really among five people, including Felicia and former mayor, Kasim Reed. Felicia is the only Black woman in this race and will need your help to stand out in this crowded field. If no candidate wins outright on Election Day, this race will head to a runoff.

LaToya Cantrell, New Orleans, incumbent:LaToya is running for her second term. She is the first woman to hold the office. While she is highly favored in the primary as the incumbent, she is facing a handful of challengers. New Orleans elections were delayed by Hurricane Ida; the primary will be on Nov. 13.

India Walton, Buffalo, challenger: In June, India won an upset in the primary against four-term Democratic incumbent Byron Brown. But he’s mounted a credible write-in challenge and could actually win. If elected, India would be the first woman to serve in the office.

Michelle Wu and Annissa Essaibi George, Boston, open seat: Two Democratic women have emerged from Tuesday’s top-two primary. Both are women of color, and would be the first woman elected mayor of Boston. Michelle and Annissa both sit on the city council.

Joyce Craig, Manchester, incumbent: Joyce is running for a third term. This is also a top-two primary, but there are two credible Republican candidates, either of whom could end up in the general with her after the Sept. 21 primary.

Give $5 to each candidate and help us maintain and grow women’s political power at city hall.