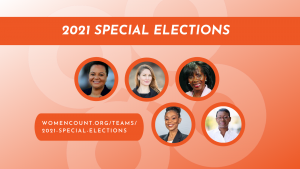 Karen Carter Peterson is 10 days away from possibly becoming the first Black woman to represent Louisiana in Congress.

And now, just as early voting gets under way, she’s facing a barrage of misleading attack ads faulting her for missing state senate votes last year—as the pandemic raged and the legislature’s Republican leadership refused to require masks or enforce social distancing.

Karen is an unapologetic progressive, running on a platform of raising the minimum wage to $15, ensuring equal pay, and developing an actionable proposal for reparations.

This groundbreaking platform just earned Karen the endorsement of Stacey Abrams, as well as national organizations like Emily’s List and Higher Heights.

Karen can win, but she needs to run strong for the next 10 days. Can you rush $5 or more to her right now via our 2021 Special Elections slate?

While you’re there, consider chipping in another $5 to Melanie Stansbury, who just clenched the nomination in New Mexico’s 1st District, formerly represented by Interior Secretary Deb Haaland. The seat is a relatively safe Democratic district, but we can’t take any chances. That election is coming up on June 1.

There are three other candidates on the slate, all in Ohio’s 11th District, formerly represented by HUD Secretary Marcia Fudge. They are Shontel Brown, a Cuyahoga County Council member; Shirley Smith, a former Ohio state senator; and Nina Turner, the former Ohio Senate minority leader and prominent Bernie Sanders surrogate.

That primary is not until August, so we have some time to support them against two prominent male challengers in this safe D district.

But we need to support Karen right now. Chip in $5 or more to our 2021 Special Elections slate.