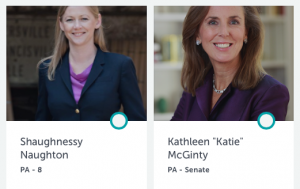 In less than two weeks voters go to the polls for the Maryland primary and the Pennsylvania primary, and the outcome sets up pick-up opportunities for women and Democrats in 2017.

In Pennsylvania, two races have the potential to flip critical Senate and House races from Republican to Democratic. So this matters. It matters so much, we created our Victory in Pennsylvania slate so we can rush some last-minute support to these two fighting women. Give to them now.

Katie McGinty, former chief of staff to Gov. Tom Wolf, is racking up endorsements in the race against incumbent GOP Sen. Pat Toomey—from President Obama and the DSCC, among others. She’s in a tight primary against ex-Rep. Joe Sestak in this race that’s considered a prime opportunity to flip a Senate seat. McGinty is slightly down in recent polls but insiders predict a late TV blitz and momentum will put her over the top.

On the House side, Shaughnessy Naughton is a chemist and small business owner running for an open seat considered one of the best prospects for a Democratic pick-up in the country. Naughton, who has been endorsed by Emily’s List as well as former Gov. Ed Rendell, narrowly lost a bid for the nomination in 2014.

Both races in Pennsylvania are top pickup opportunities in November—let’s make it women candidates who make that happen.

Give $5 or more to each of these candidates and help add two new Democratic women to Congress next year.