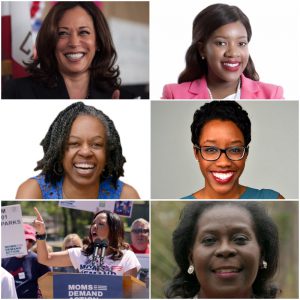 Black women are at the core of the Democratic Party, as its most reliable voters and volunteers. It’s way past time a Black woman appeared at the top of our ballots.

But we know that’s not enough. If Kamala becomes vice president, and her Senate seat isn’t filled by another Black woman, there will be no Black women Senators serving in the 117th Congress. Even if a Black woman takes her place, one is shamefully inadequate.

Kamala wouldn’t be where she is if she hadn’t come up through the political pipeline, as San Francisco’s district attorney, then California’s attorney general and junior US senator. Too often, though, that pipeline doesn’t serve women of color. It’s not gone unnoticed that no Black women are running in the most competitive Senate races this year.

Getting more Black women into the House is one way to fill the pipeline, making it more likely that in 2022 and beyond, Black women will be running in the most competitive Senate races.

We’re proud to have such a savvy group of women (and male allies!) dedicated to crowdfunding women candidates.

Keep an eye on your inbox—we’re about to draw the winner of the tote, and you’ll be notified via email if it’s you.