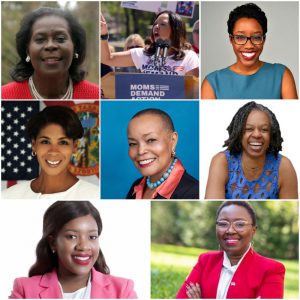 Did you celebrate Juneteenth on Friday?

Most Americans are taught in school that slavery ended with the Emancipation Proclamation in 1863. But that’s not the whole story. Union forces were unable to enforce the proclamation in Texas until June of 1865.

Thus was born Juneteenth, the oldest celebration of the abolition of slavery in the United States.

Now, the racial justice protests sweeping the nation have brought renewed recognition of Juneteenth. For many White Americans, last week’s celebration was a first. We have some work to do to make sure Juneteenth continues to be widely recognized—and that our protests lead to real change.

That’s why we’re again urging you to Support Black Women by giving to our slate, which features 8 women running in the closest Congressional races.

At the top of our slate are five women who can flip seats. Joyce Elliott (AR-2) has served in the Arkansas state legislature since 2001, first as a representative and now as a senator. Pat Timmons-Goodson (NC-8) sits on the US Civil Rights Commission. Cynthia Wallace (NC-9) is a proud Spelman alumna and the district’s former party chair. Jackie Gordon (NY-2) is a combat veteran whose service included stints in Afghanistan and Iraq. And Desiree Tims (OH-10) is one of dozens of Obama Administration alumni who have run for Congress in recent years.

Jackie has a primary next Tuesday, June 23. She’s the frontrunner but does have an opponent and could use your help the most.

Also on the slate are frontline incumbents Lauren Underwood (IL-14) and Lucy McBath (GA-6). Both flipped seats in 2018 by thin margins—Lauren by 5 points and Lucy by 1 point—and are critical seats to hold if we want to keep our majority in the House.

Finally, Florida will be a battleground state this year, both for the US House and the Presidency. Pam Keith (FL-18) is the underdog in a primary for a seat that has flipped between Republicans and Democrats since 2010—and it’s a prime candidate to flip this year.

Let’s put these women in a position to win and make our politics more inclusive in the process. Chip in $5 to each of them.

Stay tuned for more updates to our Support Black Women slate. We’ll be updating the candidates all summer long.