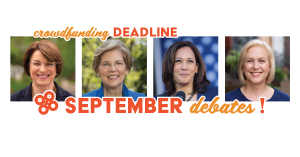 This week’s second-round Democratic debates seem like they’ll be similar to the first, with the same candidates and only one new top-tier matchup: Elizabeth Warren and Bernie Sanders.

But for the third round of debates in Houston on Sept. 12 and 13, the stage will be much less crowded because of new selection rules from the DNC, and that could mean cutting women out of the debates!

Right now, only six candidates have met both the polling and donor thresholds for a spot on the stage: Joe Biden, Pete Buttigieg, Kamala Harris, Beto O’Rourke, Bernie Sanders and Elizabeth Warren—who just announced she has 1 million individual donors. She is the second presidential candidate, along with Sanders, to reach that milestone this cycle.

But two leading women, Amy Klobuchar and Kirsten Gillibrand, have not yet met the donor threshold: 130,000 individual donors from 20 states.

We have to keep all four of these women on the stage. Help do that by chipping in $5 each to Klobuchar and Gillibrand, then chip in an additional $5 each to Warren and Harris to ensure their fundraising stays strong.

We started the year with a historic number of women running for the presidency. Now we’re heading toward the fall—when the primary season will really get serious—with only two women poised to make it to the first primaries.

We just can’t let this be how the primary shakes out for women. We’re 53% of voters and we deserve equal representation on that debate stage!

The good news is, this is why WomenCount was created: to give women candidates and donors a quick, fun way to harness the power of crowdfunding for political giving. We want every candidate—from president on down to state and local candidates—to be able to build a robust group of individual donors, even if they don’t get to 1 million.

So chip in $5 each to Klobuchar, Gillibrand, Warren and Harris to Keep Them On the Stage, then forward this slate to your friends and encourage them to give $5 too.