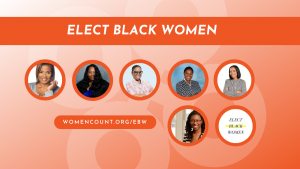 The Senate actually did something this week:

Most Americans are taught in school that slavery ended with the Emancipation Proclamation in 1863. But that’s not the whole story. Union forces were unable to enforce the proclamation in Texas until June of 1865. Thus was born Juneteenth, which Texans and other communities have already been celebrating for more than a century.

Like MLK Jr. Day, Juneteenth should be much more than a “day off” from work and school. It should be a day of action—for serving your community, fighting systemic racism, and learning more about the United States’ history of slavery and its lasting effects on our lives.

We are calling on our members to recognize Juneteenth this year by giving $5 or more to our Elect Black Women slate, created in partnership with Elect Black Women PAC, which is working to get more Black women elected locally.

The slate of candidates who are all running in local elections this year includes:

Give $5 to each of these women on our Elect Black Women slate.

Thanks, and happy Juneteenth!