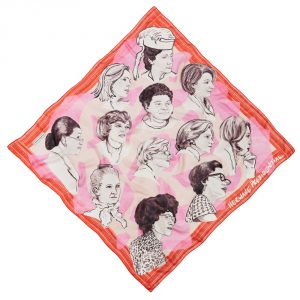 We don’t want qualified women left off the debate stage—but that could happen if Sen. Kirsten Gillibrand doesn’t meet the 130,000 donor threshold by next Wednesday, Aug. 28.

That’s the deadline for qualifying, and Sen. Gillibrand is fewer than 30,000 donors away.

Who has qualified? So far, out of 10 candidates on the stage only 3 are women. Yesterday, Julián Castro met the polling and donor threshold. Last week, Tom Steyer met the donor threshold and is likely to qualify. And earlier this summer, Andrew Yang hit both measures. No shade to these guys, but are an investment banking billionaire and a tech startup CEO more qualified to be on the debate stage than New York’s two-term junior senator?

We think she belongs there. So to help Sen. Gillibrand get on the stage—and to keep grassroots fundraising strong for all four women on our Keep Them on the Stage slate—we’re raffling off this amazing scarf from Resistance by Design to anyone who gives $20 or more to the slate before midnight on August 28.

The scarf features Sen. Gillibrand and the three other candidates on our Keep Them on the Stage slate, Sen. Kamala Harris, Sen. Amy Klobuchar and Sen. Elizabeth Warren.

The design is Herwave Presidential, from Resistance by Design, a company founded in the wake of the 2016 presidential election to help us literally wear resistance on our sleeves—and everywhere else.

Don’t miss your chance to win one and keep a supremely qualified woman like Sen. Gillibrand on the debate stage: Chip in $20 now.

PS: Purchase a Herwave Presidential scarf directly and receive a 10 percent discount with the promotion code WomenCount. And $10 of your purchase will go to WomenCount!