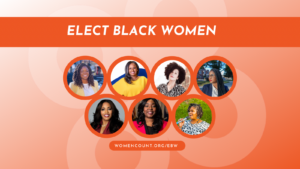 Six weeks before Election Day, we’re back in your inbox with an update on our Elect Black Women slate—which so far has raised more than $22,000 for Black women running in local races in 2021.

Our partnership with EBW includes 25 total candidates, but today we are promoting seven in particular. All are on the ballot for regular Nov. 2elections:

Julia Mejia, Ruthzee Louijeune & Carla Monteiro — Boston, MA City Council
The results from last week’s primary are in, and three Black women are in the race for Boston’s four at-large city council seats. Julia is the only incumbent, and the current field features eight candidates. If all three of these women win, Black women’s representation on the council would increase by 50 percent.

Kendra Hicks — Boston, MA City Council
This District 6 seat is currently vacant, so it’s a prime opportunity to pick up a seat for Black women. Kendra came out ahead in the primary, but her challenger came in a close second, so this race is still wide open.

Jasmine Gore & Bridgette Craighead — Virginia House of Delegates
Democrats must maintain their majority in the VA House of Delegates this year, but they also have the opportunity to expand that majority. Jasmine (District 62) and Bridgette (District 9) are running in Republican districts where we could move the needle.

Carmalitha L. Gumbs — South Fulton, GA City Council
Carmalitha is the incumbent in this district, but because of how Georgia’s electoral system works, she currently has a Democratic challenger. If neither gets above 50 percent on Election Day, they’ll go into a runoff. We’d like to keep her out of that runoff.

Donating ASAP can help these candidates stay competitive during this race to the finish. Give $5 or more to each through our Elect Black Women PAC slate.