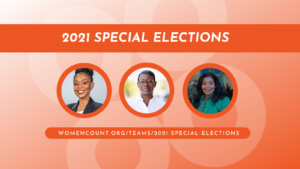 Another pivotal 2021 special election is around the corner. And the outcome is too close to call.

On Tuesday, August 3 voters in Ohio’s 11th Congressional District will pick the successor to Rep. Marcia Fudge, who became Secretary of Housing and Urban Development in March.

This is a primary in a solid blue district, so whoever wins on Tuesday is heading to Washington.

Although former state Senator Nina Turner led the race for months, buoyed by her status as a prominent surrogate for Sen. Bernie Sanders’ presidential campaign, Cuyahoga County Councilwoman Shontel Brown has now closed the gap, making this race a tossup.

Major endorsers have lined up on both sides, with Nina winning support from Sanders and Rep. Alexandria Ocasio-Cortez, and Shontel from Hillary Clinton and Rep. Jim Clyburn.

You can support either or both women during this pivotal final stretch by giving to our 2021 Special Elections slate. Chip in $5 before Tuesday.

The primary for this solid-blue district is not until Nov. 2, but the field is already crowded. Barbara needs help early to stand out and run a competitive campaign. Chip in $5 to her too as you’re making your contributions in OH-11.

We may add more FL-20 candidates as we see more polling and endorsements. Keep an eye on the slate.