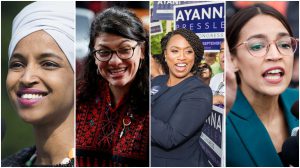 On Sunday, Donald Trump dropped some of the most racist comments we’ve heard from him in a while, telling Reps. Ilhan Omar, Rashida Tlaib, Ayanna Pressley and Alexandria Ocasio-Cortez to “go back” to where they came from.

This was in response to the four criticizing a recent legislative deal that moved more money to border detention centers where children are being held in inhumane conditions.

It doesn’t matter to him that all four women are American citizens and that dissenting patriotically to help this country live up to its promises is an American tradition. But the wording of Trump’s attack is not random or careless. “Go back where you came from” is hurtful to people of color not because it’s shocking, but because it’s familiar.

Trump is signaling that he and his supporters think people of color can’t possibly be American. He’s affirming those who think everyone who isn’t white “comes from” somewhere else; he’s saying that Americans of color don’t have the same right to participate in our government.

It’s no coincidence we’ve rarely heard something this blatantly racist from Trump since he was first running for the presidency three years ago. He’s running again, and he thinks sowing division and thrumming racist sentiments is how he’ll win again.

We’re not going to let him do that, and we’re going to start by showing the Squad we have their backs. Chip in $5 right now to Reps. Omar, Tlaib, Pressley and Ocasio-Cortez.