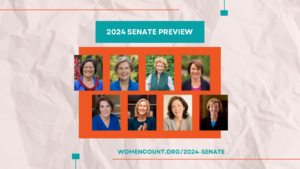 During last week’s convening of the Electing Women Alliance, every elected official we spoke to agreed on one thing: Early money is essential.

It helps vulnerable incumbents stave off serious challengers, and helps safer incumbents meet their fundraising goals early so they can pivot to helping candidates down-ballot.

That’s why today we’re debuting our 2024 Preview slate of eight incumbent Senators we know are running in two years, and who need a head start on Q1 goals next year. Give $5 or more to each of these women now.

⭐ Case in point #1: Heading into the 2022 cycle, we expected Sen. Maggie Hassan to be one of the most vulnerable incumbents this cycle.

In the end, she won by nearly 10 points in large part because strong early fundraising helped keep her most credible opponent, Gov. Chris Sununu, out of the race, forcing Republicans to choose MAGA extremist Don Bolduc as their nominee instead.

⭐ Case in point #2: Sen. Kirsten Gillibrand (NY) dropped in during the EWA convening to pledge her support for helping House candidates take back the chamber in 2024, after a dismal 2022 showing for Democrats across New York state.

If we can give these women a head start on fundraising in 2023, they’ll be in stronger positions in 2024. Give $5 or more to each of them now.

Note: You’ll notice two women missing from this slate. We expect Sen. Dianne Feinstein to retire this cycle—well deserved after more than 50 years of public service. During her first term Sen. Kyrsten Sinema has blocked many issues we care deeply about as Democratic women, so we’re waiting to see how the primary shakes out. You can still support her on our Build A Slate page.