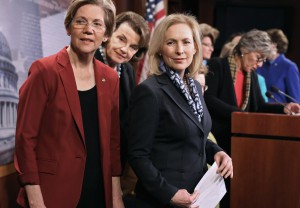 The news is still buzzing with this week’s announcement: Sen. Elizabeth Warren has formed a presidential exploratory committee, making her the first woman to officially put her name on the list of 2020 hopefuls.

That’s why today we’re rolling out our Presidential Pledge slate. Give now to the potential campaigns of Sens. Warren, Kirsten Gillibrand, Kamala Harris and Amy Klobuchar, and the funds you donate today will roll over into their official campaigns when they declare.

Test it out: Show you’re committed to putting a woman in the White House in 2020 by pledging $20 or more.

In other big news: The 116th Congress—the most diverse Congress in history—starts work today, with Speaker Nancy Pelosi at the helm!

Democrats are taking charge with a long list of policy priorities, including protecting our election system and investigating the President Trump and his administration’s myriad ethics violations. But before they can get to that, they’ll need to go head-to-head with him and Senate Republicans over reopening the government.

House Democrats are united against providing any funding for a wall—even Democrats who are in vulnerable districts that will be top Republican targets in 2020.

Encourage them to hold fast by chipping in $5 or more to each of the candidates on our Close Calls slate of newly sworn-in freshmen who won their races by 2 points or less.