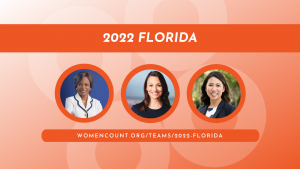 Over the last few weeks, we’ve seen the field take shape in what will be some of the most competitive races for 2022. But nowhere is the entire statewide ticket as complete right now—and as interesting—as it is in Florida.

That’s why today we’re officially debuting our 2022 Florida statewide slate of women running in the closest races: Val Demings for US Senate, Nikki Fried for governor, and incumbent Stephanie Murphy for re-election to the US House.

Give $5 to each and help us reach $2,022 on the slate before crucial second-quarter fundraising ends on June 30.

A little more about the candidates:

We won’t sugarcoat it: Winning in Florida is going to be tough in 2022. But if anyone can, it’s these three women: Give $5 to each of them now.