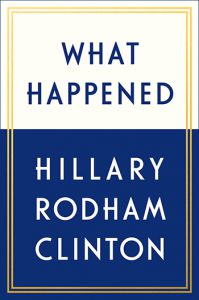 Have you read it?

We have been consumed with Hillary’s new memoir, What Happened, since it hit the shelves last week.

As we retrace our steps through her campaign to its heartbreaking end, we’ve needed to keep in mind the one silver lining: the record number of women who have taken that heartbreak and turned it into action by running for office.

Supporting these women is the focus of a new grassroots campaign we’re kicking off with Off the Sidelines, Emerge America, and other organizations: One Million Strong —–   a group of one million people dedicated to supporting women candidates in 2017, 2018 and beyond.

Much of What Happened is hard to read, especially given what we know now about the depth of the foreign and domestic propaganda campaign against her. We also know more about her campaign’s own mistakes —–   small mistakes, but mistakes that snowballed because of the enormous double standard that exists for all women candidates, but especially for her.

But we’re also inspired. In the face of so much, Hillary never gave up, and neither can we —–   because the thousands of women running in races across the country are counting on us. They’re counting on our time, our advocacy, and our money. (Of course —–   we’re a crowdfunding platform, after all!)

From What Happened, p. 141: “We need our politics to resemble our people. When the people who run our cities, states, and country overwhelming look a certain way (say, white and male) and overwhelmingly have a shared background (wealthy, privileged) we end up with laws and policies that don’t come close to address the realities of Americans’ lives. In other words, representation matters.”

Show women candidates you’re with them. Sign onto the One Million Strong pledge.

Now, back to the book!