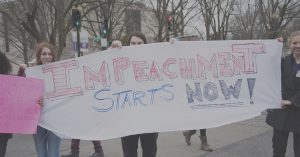 Trump’s close confidant and former campaign manager Corey Lewandowski was the first—and so far only—witness to testify, and no bombshells were dropped. But it’s clear the push for impeachment is heating up: 146 Democrats currently support it publicly, including a dozen sitting in seats that are toss-ups for 2020.

Among these courageous swing-seat Democrats are six freshman women from districts that Donald Trump won in 2016, or that went very narrowly to Hillary Clinton and flipped last year.

They’re on our Women Without Fear: Swing Seats for Impeachment slate, and to thank them for taking a stand we want to give them a fundraising boost this week as impeachment hearings get underway.

Clearly, there’s a lot of uncertainty in these districts, but these six women aren’t letting that sway them from doing what’s right: calling on their colleagues in Congress to do what obviously needs to be done and impeach Donald Trump.

Let’s show them we have their backs: Chip in $5 to each.