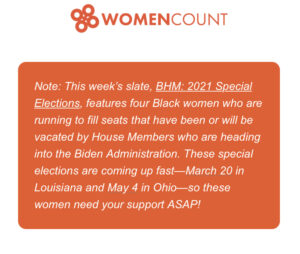 On Election Day 2020 (or rather, Election Week 2020), Black women set a new record for representation in the House of Representatives by winning 24 seats, up from the previous record of 22.

Now, upcoming special elections can help us hold and increase the number of Black women in Congress. Black women are competitive in two House races that have resulted from Cedric Richmond (LA-2) and Marcia Fudge (OH-11) heading into the Biden Administration.

Support all three women so they will be competitive in the primary, or feel free to customize your donation if you have a favorite.

In LA-2, which encompasses New Orleans, Karen Carter Peterson could be the first Black woman to represent the seat, and she’s clearly the frontrunner as the most recent former chair of the Louisiana Democratic Party and a current state senator. She also made it into the runoff for this seat last time it was competitive, in 2006. But she will have to hold off a strong challenge from her fellow state senator and former New Orleans City Council member Troy Carter.

These elections are coming up fast, on March 20 in Louisiana and May 4 in Ohio, and these women need your support ASAP to stay competitive. Give $5 or more now to our BHM: 2021 Special Elections slate.

And stay tuned for updates on this year’s special elections in NM-1 and TX-6.