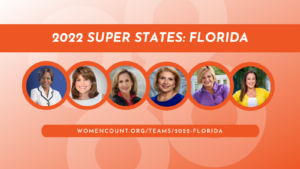 Last night’s primaries in NY and FL were *great* for Democrats—but not Democratic women.

Women came up short in every competitive race:

There are a couple bright spots for women:

And something happened that all Democrats can celebrate: Democrat Pat Ryan triumphed in the special election for NY-19, a bellwether district. Pat made abortion rights the key theme of his campaign.

So while we’re disappointed women didn’t fare better in competitive races, it’s electrifying to see abortion rights boosting Democrats’ chances of holding the House. Moving forward, let’s make sure the women who did win on Tuesday have the resources to triumph in November.

That’s why today we’re introducing our first 2022 Super State: Florida. It includes Val, Annette and four of the most competitive state legislative races. Give $30 or more ASAP.