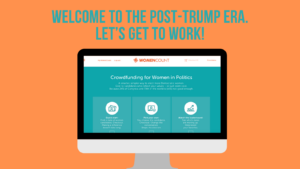 Welcome to the post-Trump era. Let’s get to work!

WomenCount has spent nearly six years working to advance women’s political participation through crowdfunding, work that culminated last week in the swearing in of the first female Vice President of the United States, Kamala Harris.

Now, we’re taking a moment to reflect on where we’ve been, and where we need to go.

When we started out, we thought we would spend a year crowdfunding to put the first woman in the Oval Office. We believed that we’d be spending the four years after that crowdfunding for her re-election, while supporting Democratic women up and down the ballot and steadily watching our numbers grow in Congress and at all levels of government. And we hoped we would be watching her sworn in for a second term last week.

We had hope right up until Nov. 8, 2016. After that devastating day we picked ourselves up off the floor fast, because we knew our mission had become 10x more critical. Trump was swept into office by a tide of hatred, much of it directed at women. We knew women were going to fuel the resistance to Trump, and we needed to be ready.

Democratic women needed a place to pool their political power, including their fundraising power. We wanted WomenCount—as the only crowdfunding platform that raises exclusively for Democratic women—to be that place.

Since 2015, we’ve crowdfunded nearly $5 million for Democratic women, with an average donation of $50. In general, women-driven political fundraising has surged. From 2016 to 2020, the amount of money given to women Congressional candidates tripled, and giving from women donors nearly doubled.

We stuck with our mission of crowdfunding women up and down the ballot, to astounding success. From our founding in 2015 through this year, women went from making up barely 20 percent of Congress, to 27 percent of Congress. Women of color are driving this transformation, and we’ve been proud to support crowdfunding equity with targeted slates like Shirley’s List.

If we’re going to build on this success over the next four years (and beyond), we need to start early. Can you chip in $5 or more now to fund WomenCount’s work this year?

Thank you again for being with us.