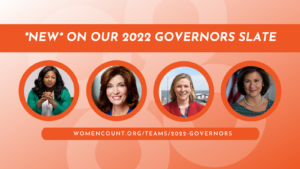 Yesterday marked the first day on the job for New York’s first female governor, Kathy Hochul. And she’s officially announced she’ll run for a full term in 2022, in what is likely to be a very crowded primary.

Welcome Kathy to the (still-too-small) club of women governors, and help her get ready for the race by chipping in $5 to her now via our 2022 Governors slate.

But during the 2022 cycle we could make major progress on all of these fronts.

– Five of six Democratic incumbents are running, helping us preserve the record total number (nine) of women from both parties serving as governor. And Kathy—or one of the other prominent women rumored to be running—could become New York’s first elected female governor;

45 female governors in our country’s history—and just nine nationally right now—is shamefully low. We have a huge opportunity to grow those numbers in 2022. Let’s make sure these women are fully funded.Give $5 or more to every candidate on our 2022 Governors slate.