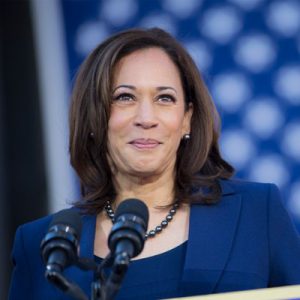 Joe Biden just named Kamala Harris as his running mate, and we are thrilled! And we are stepping up today to have her back—just as we have been since 2016, when we first added her to our platform during her run for US Senate in California.

Now, it’s time to help her make history again as the first Black woman to become Vice President of the United States. Through Election Day, we’ll be raising for Kamala and Biden through our She’s (On) the Ticket slate.

Kamala has been a fighter her whole career, and we know she’ll be an unstoppable force on the campaign trail.

Her toughness was on display during her very first year serving as San Francisco’s district attorney, when she made waves by refusing to seek the death penalty in the high-profile case of a murdered police officer, citing fairness concerns but also her personal opposition.

As AG, she refused to defend California’s notorious anti-LGBTQ Prop 8, and performed the state’s first same-sex marriage. She also held out against the big banks after the financial crisis, securing for California homeowners the largest mortgage debt settlement in the country.

And as California’s junior US Senator, she has been one of the most progressive voices against the Trump Administration.

Trump and his enablers know Kamala is a fighter too, and they’re scared—just as they’re scared of all smart, accomplished, powerful women.

Let’s keep Trump running scared: Give $5 or more to Kamala via our She’s (On) The Ticket slate.

WomenCount is particularly proud to root for Kamala, who supported us in the early 1990s when we were a get-out-the-vote effort. Her tagline was “First they said women can’t vote. Now they say we won’t.”

As we approach the 100th anniversary of women’s suffrage, we’re thrilled that women again can wield our votes to support a woman on the presidential ticket, even if we aren’t breaking the highest, hardest glass ceiling—yet.

With more women running, at all levels, it’s only a matter of time.