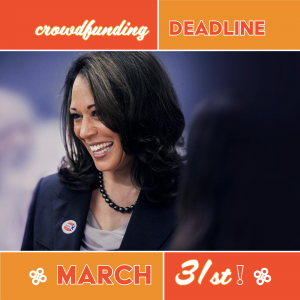 There are only a few days left in March, and we’re still more than $2k short of raising $10k for the four top-tier women running for president.

Sure, we’re still a year out from peak 2020 primary season. But the first debate is in June, and the first quarterly fundraising deadline for all declared candidates is March 31. We’ve already seen multi-million-dollar debuts from some of the men (you know who they are).

We have to make sure the women show big numbers too—and you can help by chipping in $5 or more to our Get Them on the Stage Slate. All four women need to rack up more individual donations and meet the DNC’s threshold to participate in the June debate.

That’s why we’ve been profiling these four women all month: We want them to post big fundraising numbers as they continue to make history for women. And the final candidate on our slate has already made a lot of history of her own: Sen. Kamala Harris.

When she was elected as California Attorney General in 2010, Sen. Harris was the first woman to hold the position. And when she won her seat in the US Senate six years later, she became California’s first black senator, and only the second black woman to ever serve in the Senate.

But Sen. Harris hasn’t just been first because of who she is—she’s been a policy leader too. During her first year serving as San Francisco’s district attorney, she made waves by refusing to seek the death penalty in the high-profile case of a murdered police officer, citing fairness concerns but also her personal opposition.

As DA, she fought California’s notorious anti-LGBT Prop 8, and performed the state’s first same-sex marriage. As AG, she famously held out against the big banks, securing for California homeowners the largest mortgage debt settlement in the country.

And as California’s junior US Senator, she has been one of the most progressive voices against the Trump Administration.

Help her and the three other top-tier women running for president have a great first quarter: Give at least $5 to our Get Them on the Stage slate now.