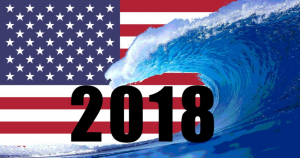 Women’s gains in Congress this year didn’t end when the last midterm race was called.

The governor of Arizona just appointed Rep. Martha McSally to serve the remainder of John McCain’s Senate term, bringing women’s representation in the 116th Congress to 24 percent—and making Arizona the 6th state to have two female Senators serving next year.

Still, Congress will have only 21 Republican women, compared to 106 Democratic women—a trend that could help Democrats in the short-term but ultimately hinder women’s chances at equal representation over time.

But, on to more good news: We’re taking a break until January, meaning this is the last communication you’ll get from us for a few weeks.

Consider this our holiday gift to you. We know it’s been an incredibly busy year, and everyone deserves a little time away from their inbox.

But please do take a second to support our work. The upcoming political cycle will be another historic one, with multiple women running for president for the first time. We’ll also be working hard to flip the Senate, and we need to protect all of our new House seats.

And with Democratic candidates increasingly swearing off funds from corporations and superPACs, low-dollar and individual giving is again poised to be the most important tool for competing with the Republicans’ fundraising machine.