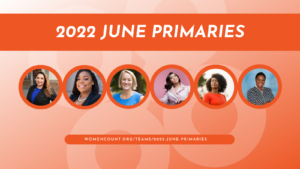 The last big primary date in June is next Tuesday, and this is your last chance to fund candidates during the final leg of the race.

The last six candidates on our June primaries slate are:

Give $5 or more now to each of these candidates, Megan.

Thanks! And stay tuned for full June primary results, plus an update on the rest of this summer’s primaries.