It’s been a week since we started protesting the double standards leveled at women presidential candidates by doubling every donation made to our Call It Out slate, and we’ve seen dozens of sexist moments—including during last night’s first debate.

But we’ve also seen great moments of power from our leading women.

They more than held their own last night. Elizabeth Warren commanded the room from center stage, and came through as the authoritative progressive voice on issues from fixing our health care system to raising wages and protecting abortion rights.

Speaking of abortion rights, one of the best mic-drop moments of the night came from Amy Klobuchar, who cut in on Jay Inslee when he mansplained that he was the only one on stage who had made progress protecting abortion rights: 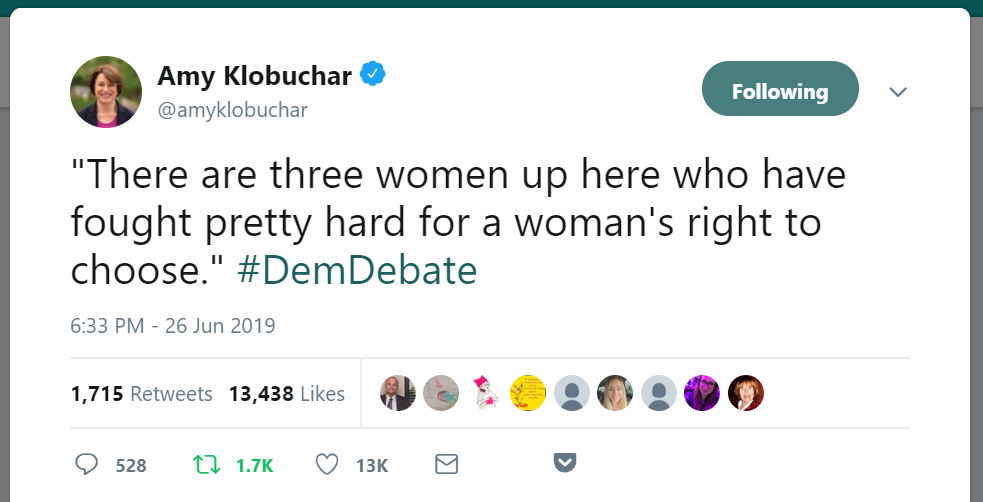 Sexism was percolating before the debate even started, too.

Last week, Bernie Sanders, in an attempt to explain why his campaign is slipping in the polls against Elizabeth Warren, said “we are running against a lot of problems”—one of those being that some people want to see a woman elected president.

And the New York Times unintentionally highlighted some sexism in its recent “Meet the Candidates” Q and A: Only two candidates (Kamala Harris and Kirsten Gillibrand) named women as their political heroes (Shirley Chisholm and Harriet Tubman).

Finally, new research from Northeastern University has found men are writing two-thirds of national stories about the presidential race. That’s probably part of why the coverage is sexist!

We’re sure there are dozens more instances of sexism we didn’t catch—but if you donate now for each one we did catch, we’ll match it through midnight tonight!

Give $5 or more to our Call It Out slate, and keep your eyes peeled during tonight’s debate for the hashtag #CallItOut and more opportunities to give!