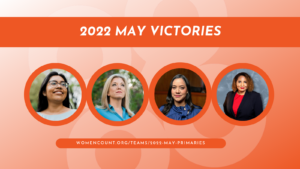 Time is running out for your donation to have an impact in May primary races. There is only one May primary date left—next Tuesday, May 24—and we’re watching Georgia and Texas.

Many of our pro-choice candidates did well in last night’s primaries. In North Carolina, Cheri Beasley won 81 percent of the vote. In Oregon, Tina Kotek won the gubernatorial primary, and both Jamie McLeod-Skinner and Andrea Salinas are on their way to winning their Congressional races against establishment-endorsed men.

Abortion rights are still on the ballot, especially in the Lone Star State, where immigration attorney Jessica Cisneros is running neck-and-neck with Rep. Henry Cuellar, the last anti-choice Democrat in the House of Representatives.

The fall of Roe leaves absolutely no room for anti-choice Democrats to hold power in Congress. Give now and help Jessica win next Tuesday.

This race’s outcome is a key indicator for whether abortion rights will energize Democrats in November. We’re betting it will, but only if we keep putting the issue front-and-center in these high-profile primary races.

These states are also likely to have headline-grabbing battles over abortion once the decision comes down.

Keep the focus on abortion rights in this year’s primaries. Give $5 or more now to Jessica and the rest of the women on our May Primaries slate.