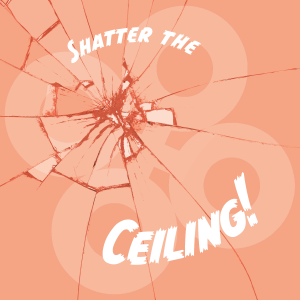 This is a special slate where you can donate $5, $50 or any amount now to the eventual 2020 Democratic nominee—but the nominee will only receive your donation if she’s a woman.

Otherwise, when the time comes we’ll split the donations among other federal races featuring women.

Check it out and make your first donation >> shattertheceiling.com

Why are we doing this? It’s simple: We want a woman for president in 2020, and we’re willing to put our power as individual donors and crowdfunders toward that goal. Let’s grow this fund to show the strength of the promise of a woman nominee.

This shouldn’t be a radical ask. Looking at the 2020 Democratic field as it stands today, it’s clear our four front-running women are the most qualified, and any would be the most formidable person to go against Donald Trump.

And America is ready. According to a recent NBC/WSJ poll, 84 percent of Americans describe themselves as “totally comfortable” voting for a woman for the nation’s highest office—nearly identical to the percentage who say they’d vote for a man.

Let’s direct the power of crowdfunding into a powerful call to Shatter the Ceiling and elect the first woman president.