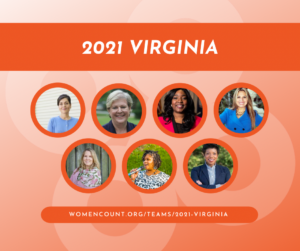 In less than four weeks, we could lose all of the progress we’ve made turning Virginia blue over the last four years.

According to polls, pundits and both campaigns, the governor’s race is now a tossup. Democrats are projected to lose seats in the House of Delegates—and it’s within the realm of possibility that Democrats could lose control of the chamber.

Why have things gotten so dire in Virginia? It’s the enthusiasm gap: More Republican than Democratic voters are excited to vote. But it’s also sagging approvals among key sections of the electorate like exurban voters and independents.

The women on our 2021 Virginia slate—running for statewide office, the House of Delegates, and local posts—will be working around the clock these next four weeks to drive home the successes Democratic control has brought to Virginia, like expanding Medicaid and protecting abortion rights. They’ll also need to work on energizing base voters. Doing both is going to take a major cash infusion ASAP.

That’s why we’re reaching out today: Can you chip in $5 or more to each candidate on the slate, and help save Democratic control in Virginia?

Losing Virginia would be a major blow to Democrats heading into 2022. We can’t let it happen.