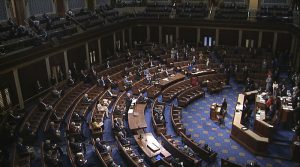 Even as we continue to celebrate the historic victory of Kamala Harris as our next Vice President, we also acknowledge that 2020 was a disappointing year for Democratic women. Ballot counting is still underway in some close races (most notably, in New York, Iowa and California), but results are not likely to change the narrative significantly. Here’s what you can take away from this year’s results:

So far, Democratic women have only picked up three Republican seats in Congress.

They are NC-2 and NC-6, which will be held by Kathy Manning and Deborah Ross, and GA-7, which will be held by Carolyn Bourdeaux. The NC victories were in large part the result of mid-cycle redistricting, which created opportunities in those seats. These seat-flippers plus Democratic women who won safe seats bring our freshman class to nine.

These results in both the House and Senate fell far short of our expectations—and the polls—and the deconstructing of this election will continue in the weeks and months ahead. We recruited strong women candidates, and they were well-funded. However, among other factors, Trump’s strength in key states that he carried had a deep impact down-ballot.

Women will break a record for representation.

Women will hold at least 140 seats, or 26 percent of Congress, up from 24 percent now. However, this spike is the result of gains by Republican women—many of whom beat Democratic incumbents who were elected in 2018. Republicans even managed to elect one new woman to the Senate, in Wyoming. Although some races are still too close to call, it appears that Republican women will hold an all-time record in representation in Congress, while Democratic women will have lost ground.

Incumbent Democratic women lost at greater rates than men—but largely because we made bigger gains in 2018.

Of the seven races currently called as losses for incumbent Democrats, five are held by women: Abby Finkenauer in IA-1, Xochitl Torres Small in NM-2, Kendra Horn in OK-5, Debbie Mucarsel-Powell in FL-26 and Donna Shalala in FL-27. But women flipped 60 percent of seats that went blue in 2018, and five of the seven seats that flipped this year went to Republican women.

Despite setbacks, it was a history-making year for women of color.

Another disappointing outcome of the election is that women of color did not make gains in representation, and Democratic women of color suffered setbacks with a net loss of one seat. But, along with Kamala, there are other history-making firsts.

We’ll update our Freshman class slate if good news breaks from any of the remaining districts. In the meantime, consider chipping in $5 or more to each of these women to welcome them to Congress.