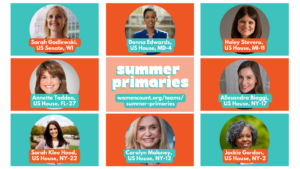 Late summer is usually a sleepy time for primaries, but not this year. Redistricting battles have pushed many into August, which now features almost as many primary contests as June.

Many of these races have one thing in common: Democratic men trying to muscle women out. This stings, especially as women confront the rollback of one of our most basic human rights.

To protect abortion rights, we need to put more Democratic women in Congress. Give $40 or more now to our Summer Primaries slate.

And remember that you can give to the entire slate — or customize your donations. It’s easy!