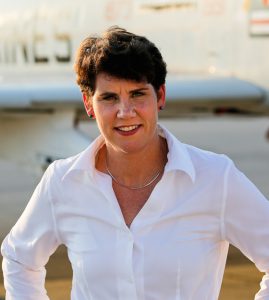 We got a new top-tier Senate recruit today!

Amy McGrath has finally put the rumors to rest and announced she’ll challenge Senate Majority Leader Mitch McConnell for his seat in 2020—setting up what will certainly be one of the most closely watched races of the cycle.

Her announcement and Theresa Greenfield’s decision to challenge Sen. Joni Ernst in Iowa brings our 2020 Red to Blue slate to five Senate challengers. That’s an impressive roster of women for a year in which Democrats might only be competitive in a handful of Republican-held states.

You already know Amy as the retired marine fighter pilot who ran in one of the most contested House races last year, losing narrowly to the incumbent Republican.

Her 2018 campaign announcement video, which centered on her childhood dream of becoming a fighter pilot at a time when women were barred from combat, electrified voters and made the race for KY-6 the closest it had been since a Democrat last won it in 2010.

Given that she was the first woman to fly a combat mission in the US Marine Corps, it’s no surprise she’s not afraid to take on the massive electoral challenge of defeating McConnell.

Welcome her to the race by chipping in $5 to her and the four other women on our 2020 Senate Red to Blue slate.

Amy actually first took on McConnell all the way back in 1989, when she was only 13 years old. The story (which she tells again in her Senate announcement) goes like this:

She wrote to both her Representative and Senator, who at that time was none other than McConnell himself, asking them to do something about the rules barring women from combat roles. Amy never got a response from McConnell, but she persisted. Many years later, after she had finished flight school and was preparing to enter the Marine Corps, Congress finally lifted the policy preventing her from becoming a fighter pilot.

Now, she’s vying for another job that’s only ever been held by men: Representing Kentucky in the US Senate.