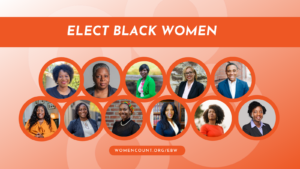 Let’s show them the power of WomenCount donors. Chip in $5 or more to our EBW slate and help kick off their campaigns with a big crowdfunding surge.

With your help we have raised over $40,000 this cycle for EBW candidates. Each email blast features a new set of endorsements and candidates, and the slate total just continues to grow!

The new candidates are:

With Judge Ketanji Brown Jackson set to be confirmed by Friday, it’s another historic week for Black women and our country.

Let’s make sure Black women keep moving up the political pipeline: Chip in $5 or more to our Elect Black Women slate.