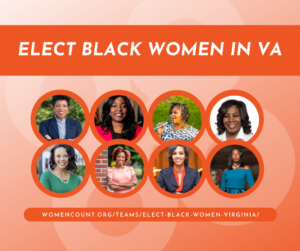 We’re sending around our Elect Black Women slate again this week —with a twist.

We’re highlighting eight candidates who can hold or flip crucial seats up and down the Virginia ballot this year. Take a look and chip in $5 to each of them.

All have been endorsed by our partner organization Elect Black Women PAC, which builds broad-based financial support for Black women running for local office.

According to the newest polls this week, Democrat Terry McAuliffe is within only 3 points of Republican Glenn Youngkin. That’s within the margin of error of most polls. Down ballot, the numbers for lieutenant governor and attorney general are similar. And Democrats in the House of Delegates are barely hanging on to their majority.

And if Democrats get energized, we can maintain Democratic control in the governorship and the statehouse—and potentially flip seats.

Let’s make sure Black women have the support they need to make these gains. Chip in $5 or more to our Elect Black Women Virginia slate.