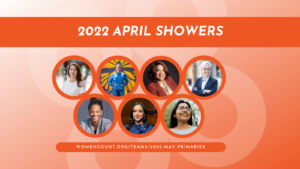 Primaries for the 2022 cycle kick off in earnest in May, with important contests in Ohio, Nebraska, Kentucky, Oregon, Pennsylvania, North Carolina, Georgia and Texas.

During these last few weeks of April, we’ll be breaking down for you the top federal and statewide races, starting with the seven most-competitive in the country.

April showers bring May victories. Shower each woman on our 2022 April Showers slate with $5 or more ASAP.

Let’s make sure these women are set up for victory in May. Give $5 to each of them via our 2022 April Showers slate.