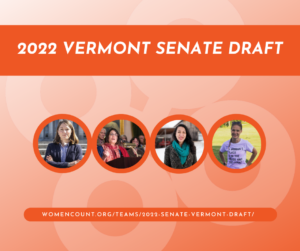 When Sen. Patrick Leahy announced his retirement yesterday, there was instant political consensus on who would replace him: eight-term Rep. Peter Welch.

We get it: Rep. Welch, at 74, has waited a long time for this seat, and he’s popular and qualified. But so are several women who currently serve in prominent political posts in Vermont. Sen. Leahy’s retirement creates an opportunity for Vermont to send a woman to the Senate—and party leaders, including Rep. Welch, should recognize these opportunities when they occur and act on them. That’s the stuff of legacies.

That’s why we’ve created our Vermont Senate Draft slate, four women with the political chops and electoral experience to win, if they get a chance.

They include the current lieutenant governor and three members of the state legislature.

This open seat is also an important opportunity to increase women’s numbers overall: The US Senate has fewer women in it than a year ago, making it even more urgent to seize opportunities when they occur.

There are also implications on the seniority front: If elected, at age 75 Welch would likely serve only one six-year term, which robs Vermont of the chance to build seniority in the Senate compared to the younger-generation women on our draft slate. On the flip side, by making the move to run for Senate, Welch gives up significant seniority he has built in the House over his 16 years in office.

And we just saw in Virginia what can happen when the “obvious” choice clears the field—less enthusiasm from voters, botching what should have been an easy win and missing the moment to make history.

Let’s make the case for a different path: Give $5 to draft these women into the race.

PS—If these women do not run for Senate, we will either direct the funds to an eventual Vermont House nominee if she is a woman, or other women running for federal office around the country.