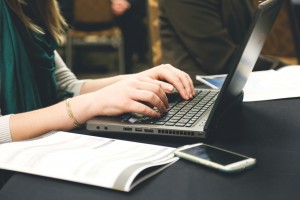 Earlier this month, the woman at the center of the GamerGate saga decided to drop the lawsuit against the online harasser who started it all (1), an ex-boyfriend out for revenge. According to a post on her blog, she came to the conclusion that the law didn’t have the tools to help her, and she would only risk more online harassment by continuing to pursue the case.

GamerGate has become a touchstone for the kind of severe online harassment that young women in particular face when they insert themselves into internet conversations about anything (2) — gaming, pop culture, sports, feminism. Politics. Post anything remotely controversial (or non-controversial, really) and you’ll be barraged with comments calling you, at best, a “brainwashed person,” or “masshole” (two great comments I got when I posted my support for Hillary Clinton on Instagram) and at worst, graphic, frighteningly specific death threats or other threats of violence, including rape.

Why doesn’t the law have the tools to take on the violent misogynists who make the Internet a hostile place for women, impacting our ability to do our jobs, speak our minds and live our lives? Maybe it’s because men still control most of our law-making bodies. A problem that doesn’t affect you personally is a problem that’s essentially invisible until someone takes the time to make you notice.

Women lawmakers are noticing. At the forefront of the current legal push to take online harassment seriously is Rep. Katherine Clark, who represents Massachusetts’ 5th District. Last June she introduced the Prioritizing Online Threat Enforcement Act, whose chief aim is to increase the funding allocated to the FBI to investigate “cybercrimes against persons.” The additional funding would go toward training agents and ensuring that they have the most up-to-date tools for these investigations, as well as mandating that more agents be assigned to the FBI division that investigates this type of crime. Of the bill’s first 10 co-sponsors, seven are women (3), including Rep. Jackie Speier (CA-14), Rep. Bonnie Watson Coleman (NJ-12), Rep. Elizabeth Esty (CT-5), Rep. Niki Tsongas (MA-3), Rep. Corrine Brown (FL-5), Rep. Anna Eshoo (CA-18) and Rep. Frederica Wilson (FL-24).

I doubt this issue would even be on Congress’ radar if not for the dedicated efforts of these women, Rep. Clark in particular. Research supports the idea that female legislators are more likely than male legislators to introduce bills that tackle broadly and traditionally defined women’s issues (4), including specific issues like reproductive rights, as well as healthcare, labor and employment, and criminal law and family law. I’m sure all liberals, men and women, would like to see more legislative resources dedicated to these important issues. That means it’s critical we put more women in office, and that starts with giving them the fundraising tools to succeed. You can start right now by giving to our Tackling Online Harassment slate and urging your friends to do the same by posting on Facebook and Twitter.

For her trouble, Rep. Clark was recently subjected to an especially dangerous “swatting” hoax. Someone, apparently unhappy with her activism against harassment (in addition to targeting online harassment, she has introduced a bill making swatting a federal crime), called in a fake report of an active shooter situation at her house, which was then swarmed with police in riot gear while her and her husband sat watching TV and their sons were asleep upstairs. Still, she says she won’t back down.

Let’s show her that we have her back. Support her by supporting our Tackling Online Harassment slate.