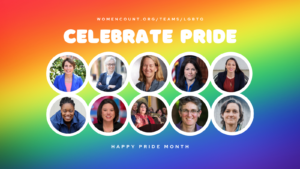 This month we’re celebrating by debuting our largest-ever LGBTQ slate of 10 women, including several who can make history in 2022:

Angie Craig, MN-2 (i): This is also a tossup race and her likely GOP foe, Tyler Kistner, is also one of the top-raising GOP challengers. Angie is the first openly gay person elected to Congress from Minnesota.

Jasmine Beach-Ferrara, NC-11: This is a long-shot race in a conservative district that includes Asheville, currentlyy represented by defeated Rep. Madison Cawthorn.

Jamie McLeod-Skinner, OR-5: She beat incumbent Democratic Rep. Kurt Schrader in the primary, and is now facing Republican Lori Chavez-DeRemer, who supports a nationwide abortion ban and is playing along with the Big Lie.

Odessa Kelly, TN-7: This is another long-shot race in a conservative district, a Republican gerrymander that includes the west side of metro Nashville.

Becca Balint, VT-AL: If elected, she would be the first woman elected to Congress from Vermont, and the first openly LGBTQ person to represent Vermont in Congress. Her main primary opponent is Lieutenant Gov. Molly Gray.

Tina Kotek, OR Governor: Tina, the former speaker of the Oregon House, is poised to be the second openly lesbian woman to be elected governor in the United States, if she can win in November against law-and-order Republican Christine Drazan.

Kris Mayes, AZ Attorney General: This is an opportunity to protect abortion rights — Arizona has a pre-Roe criminal abortion ban that Kris has already pledged not to enforce if she becomes the state’s chief law enforcement officer. This close race could be a Democratic flip.

Dana Nessel, MI Attorney General (i): This is another opportunity to protect choice. Dana has already vowed not to enforce Michigan’s 1931 criminal abortion ban or defend it in court, citing her own abortion story.

Thanks for supporting LGBTQ candidates during Pride month—and beyond—Meghan! You’re helping them make history this year. And even in long-shot races, we’re helping fill the pipeline for the future.