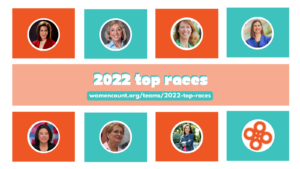 Tomorrow is the final quarterly deadline before Election Day, and these women are running against men in seven of the closest races this year.

Why are we highlighting them? This election cycle is on track to be one in which Democratic women’s representation in Congress shrinks, mostly due to poor recruitment efforts early in the cycle. Their male opponents also have extreme opinions on abortion rights.

We need to help these women keep their seats:

Cindy Axne, IA-3: Her opponent State Senator Zach Nunn said during the primary election that he believes all abortions should be illegal, without exceptions.

Angie Craig, MN-2: Her opponent Tyler Kistner supports a national abortion ban, as well as bans without exceptions for the mother’s life or health.

Marcy Kaptur, OH-9: Her opponent JR Majewski is a literal insurrectionist who stormed the Capitol on Jan. 6, and he believes “life starts at conception.”

Let’s make sure anti-choice extremist men don’t push these women out of Congress and further endanger our rights. Rush a donation of $5 or more to these seven women now—before the final end-of-quarter deadline tomorrow.