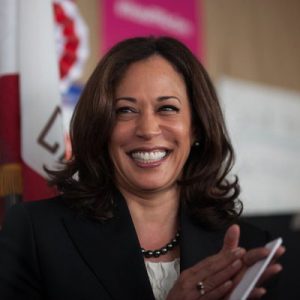 In entering the race, she becomes only the second Black woman ever to mount a serious candidacy for a major-party nomination.

It’s fitting then that she announced on Martin Luther King Jr. Day, and is planning to kick off her campaign in Oakland, California, her hometown and a city rich with Black history.

And like our other top-tier women candidates, she’s announced early, giving voters a chance to get to know her and donors a chance to fuel her campaign before the potential top-tier men whose intentions are still only rumors.

Make sure these early announcements pay off: Pledge $20 to Sen. Harris and the other three women on our Get Them on The Stage slate.

Let’s back up a second—why is it ‘Get Them on The Stage’? The DNC has new rules for getting on the main debate stage: Candidates must raise a certain amount of their funds from ‘grassroots donations.’

Crowdfunding on WomenCount is one way for them to hit that target and better compete with men who may have a built-in grassroots fundraising advantage from previous campaigns. Maybe that’s why more top-tier men haven’t yet announced (right now there are actually more women than men in the Democratic primary).

It’s a crowded field. But as a former prosecutor Sen. Harris is poised to distinguish herself on holding criminals to account while reforming the justice system—critical assets if she’s the one to confront a sitting president with so many legal liabilities.

Give her a boost as she makes her announcement: Pledge $20 to her and the other three candidates on our Get Them on The Stage slate.

The first Democratic presidential debate is only 5 months away, so don’t wait to give.