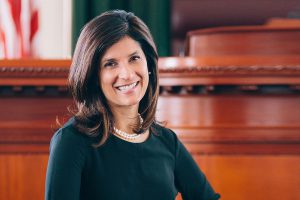 Sara Gideon is officially IN to defeat Maine Sen. Susan Collins in 2020! We’ve been teasing Sara’s candidacy for months, but now you can finally get to know a little more about her:

Sara, the daughter of immigrants, is currently in the middle of her fourth term in the Maine House of Representatives, her second serving as Speaker. During her tenure, she’s helped safeguard ACA protections in Maine, expand abortion access, give low-income families more education and housing assistance, and tackle the opioid crisis—mostly in the face of opposition from Maine’s former infamous Republican governor, Paul LePage.

Now, she wants to take on even bigger GOP foes: Sen. Mitch McConnell and President Donald Trump. Sara’s announcement video took Sen. Collins to task for bowing to their tax cuts and Brett Kavanaugh, despite her reputation as an independent.

Help Sara do just that: Chip in $10 or more to her by giving to our Red to Blue: 2020 Senate slate before the June 30 federal fundraising deadline! You can give just to Sara or donate to the entire slate.

Sara is the most formidable challenger Sen. Collins has picked up this cycle—and if she can show overwhelming grassroots fundraising power, she could be a shoo-in for the nomination. That’s what we want: Because she’s the best candidate, but also because we don’t actually want to see women’s representation in Congress go down this cycle.

As Sara’s announcement video notes, Sen. Collins had the most successful fundraising period of her career in the days after she voted to confirm Kavanaugh. Sara can access a $4 million fund that’s dedicated to helping Sen. Collins’ eventual opponent, but only when (and if) she wins the nomination.

If Sara can report big fundraising numbers after the June 30 deadline, that could be enough to keep her path to the nomination clear.