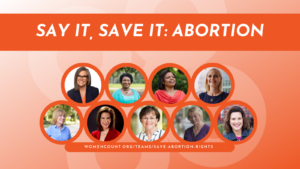 Now we know that Roe v. Wade is mere weeks from being struck down by the Supreme Court, according to a draft opinion leaked to Politico on Monday.

The moment we feared most when Hillary lost the presidency nearly six years ago is here, and we can’t stop it.

But we are not powerless. Instead, our most important work is now ahead. Fifteen states and the District of Columbia explicitly protect abortion by law. Fifteen other states have either pre-Roe bans that Democrats can try to block, or no explicit laws banning abortion.

Two of those states—Kansas and Michigan—have Democratic women governors who are up for re-election. One other—Arizona—is a key gubernatorial battleground this year. And if we maintain our Senate majority, we can block the anti-choice movement’s next goal: Banning abortion nationwide.

We must preserve abortion rights wherever and however we can. Right now, that means saving the states, protecting the Senate, and expanding the ranks of Democratic women in statewide offices to protect more women.